Coffee tastes good every morning but some mornings it’s like DAMN.  Maybe it’s the extra cinnamon.

Nick and I are looking at only being in Hawaii for about two more weeks!  We have an entire wildland fire contracting business to erect, prior to the 2021 season getting under way (ie burning shit down as per usual), and it’s all moving so fast.  We’re going to be running 3 sink trailers (mobile handwash stations) this season, with the help of two other operators, and try to obviously turn as much of that money around as possible into growing it bigger for 2022.  Well — Bitcoin would be our intermediary holding/hodling place, of course.

Crypto Jackk, who we’ve both listened to for years, is predicting a 30% correction at some point.  Bitcoin corrections, for the critics, function kind of like when vegans get sick.  Meat eaters *love* when a vegan got sick because they’re like, a-HA!, I fucking KNEW IT!  When Bitcoin corrects, as it constantly does, all the haters and self-flagellating short termers swarm up and piss on it, feeling smug.

I’ve never thought of myself as someone who could think long-term particularly well.  In fact I’ve written blogs about this — the ubiquitous question, “Where do you see yourself in ten years?,” always left me envisioning nothing, just blankness, and wondering if that meant I was gonna die or something.

But my honest opinion now is that some of us come here with a few clear life trajectories laid out, and some of us have chosen to exist at the nexus of rather a lot of possibilities, for some reason, and I’m of that latter sort.

Anyway, yes, I’ve gone so far as to self-identify as a short term thinker because I literally did not know what I wanted beyond the next couple months, for most of my life, and I mean in even very basic ways.  I’ve been torn between living in a house versus a van forever.  And if a house (or a van), in the US or not in the US?  It wasn’t clear to me I wanted to be in a relationship until I was like 41 or so.  I liked the idea of companionship before, but other than that it seemed almost like handcuffing myself to a park bench.

Enormous questions like this make it very hard to plan, and have been one more reason I’ve thrown in hard with those few, few, very few things that have been clear to me — pretty dresses, my body’s physical and aesthetic condition, cultivation of the creative impulse, and my little dog.  I’ve been like, “yo that’s all I know.  That’s the extent of it.”

So why was I able to see the possibilities of Bitcoin, to some degree, and the revelation it represented, when big dick financial experts couldn’t?  I mean, I believed in it so much that I’d buy at 5k and then realize oh shit, I need that money at 3k and pull it out because my amazement at the concept had outpaced my ability to budget.  Also, work and income has always been this really up and down thing for me lol.

But I remember having dinner and drinks with a friend who was in town, back in 2017 or something, and I was saying, “How can anyone not be amazed about this?  It’s not fiat.  It’s not fiat!  No government can keep you from it, or interfere, or shut it down, or even meaningfully regulate it!”

My friend was like, “Yeah…I don’t know…,” but then he did reference some passage in a book we’d both read that seemed to meaningfully predict it.  What was it?  Ah — Cryptonomicon, by Neal Stephenson.  That was it.  And we were even able to Google up the passage, I believe.  That’s as far as that conversation went.

On another occasion, I was a a formal soiree in San Diego for a theatre event and I found myself at a table with a couple of investment bankers.  I had brought a leased International down from Spokane to LA and a friend invited me to the soiree so I’d had to find something to wear, as I recall.  Having zero financial vocabulary, I said something like, “Do y’all think the dollar’s gonna collapse because of all this debt and money printing?”  Lol!  And — they were very nice people — but they were all basically like the Leonardo DiCaprio meme where he’s smug with his whiskey snifter, and long story short did not think the dollar was in any danger and explained to me that that was silly.  I was like, “Oh, okay.  What do you think about Bitcoin?”  They just kind of looked at each other and shrugged.  Nobody was mean but I was in over my head and it was obvious. I was like, “Hey, I’m just a truckdriver” and that confused them and then the performance began so that was it.

So anyway, back to the point, what’s very silly in reality is to be so much of a short term thinker that Bitcoin’s infinite corrections represent a cause for alarm.  I’ve been alarmed to have bought high and sold low on numerous occasions because I saw something on the internet I really wanted, or whatever, but I wasn’t alarmed.

Anyway, my barely-there long term thinking on BTC has now evolved to a point where I don’t care, beyond certain obvious financial realities, what Bitcoin does today, this month, this year, or this decade.  It’s bigger than that.  It just reached a trillion dollar market cap — meaning one trillion dollars of fiat have poured into it, one way or the other — and I find that my long-term thinking is improving slightly in every area of my life.

Nick and I already have a strong sense of what equipment we’d like to get into, next season, and why, and how, and what’s gonna be involved in getting up and running this season, and we’ve spent many hours brainstorming with each other and with friends who are further along than us.  We’re both so, so excited, and now that the time for preparation is almost upon us, each new day seems to bring another piece of the puzzle or unexpected gift.

It’s all going to be really fun — we have to, first of all, convert two cargo trailers currently specialized for something else to be, instead, sink trailers, and we’re gonna do that in Texas with the help of a friend — but one of the things I’m looking forward to most is getting the initial kinks worked out and just being on fires again, with everything pretty much rolling along for all the units and all the operators.  This will be the easiest fire job I’ve ever had, as an operator, biz stuff aside — I started in fuel and occasional water trucks, moved to mobile shower unit at the worst possible time relative to COVID, and now this.  We’ll have long days, mostly at our disposal, and we cached our weightlifting equipment in Arizona so we’ll be able to continue our contest prep.  The little dogs will do their little dog things with us, all season long, and we’ll just keep working on getting stronger and richer and happier and healthier as per usual!

The only thing that could mess this up is, you know, mandatory vaccine passports, communistic takeover of our country, the entirety of the illegitimate president’s tendencies, all that, but we’re just gonna keep our eye on the prize and figure it out.  We’ve been figuring it out since day one of this stupid coup (flu deaths went to zero, COVID deaths with 2.6 co-morbidities as a rule? come the fuck on), road tripping all around the country when everyone was supposed to be sheltering in place, etc.  You can’t let this stuff stop you from living.  You give an inch and they take a fucking mile.

We’ll be home basing out of the Boise, Idaho area, for the season.  Since we’re entirely homeless, on the mainland, we can choose anywhere, but whatever location’s contract we bid for is good for three years, so it’s kind of a big decision.  We’re just camping unless we figure out something else, so we don’t want to burn up in the south.  Then the other big thing is we want to at least have a hope of finding a gym that doesn’t require masks.  Idaho hasn’t been quite as overt as Florida, but they low-key ain’t having it.  It’s much more normal life there.

We were considering all this yesterday morning — Arizona?  Colorado?  Texas?  Oregon? — and I told Nick, I had the best three days of my life, between fires a couple years ago, staying at the KOA Meridian.  There was a vegan cinnamon roll place nearby with custom toppings.  There was a pool, and laundry, and green grass, and Buffy and I were in teepee tent heaven.

So we called that same KOA yesterday and they said they’re booked up through the end of time.  All the refugees from California and Oregon, trying to get somewhere not insane.  Idaho’s not loving it.  So the KOA is off, but we’ll figure it out.

By the way, this trend has become apparent to me of people voting blue until they ruin their state, then moving to a red state, then doing the same thing. It’s really a problem. I ran across a tweet yesterday assuring me that all masculinity is toxic and we’ve got to get rid of the baby and the bathwater, there. First off, I thought, that’s a crazy set of train tracks to lay down on; second, you know what would happen even were that possible? I mean, let’s say there’s some area of the United States where masculinity itself was finally deconstructed. You wanna know what the fuck would happen? All the women would move to wherever masculinity was still functioning, that’s what.

Anyway!  Winters in Hawaii, summers in Idaho from here on out, unless/until we get things ramped up to a passive income/remote management level, which we’re not super committed to — Nick and I love being out on fires with our lil bugaboos.  I guess it just depends on…national and global stuff.  Nick told me in the kitchen just now he wants us to be millionaires within four years and I was like, Yeah I don’t know why not!  We were only homeless last year lol.

I can’t believe I have a guy to do all this with.  It’s not like being handcuffed to a park bench at all, with him. 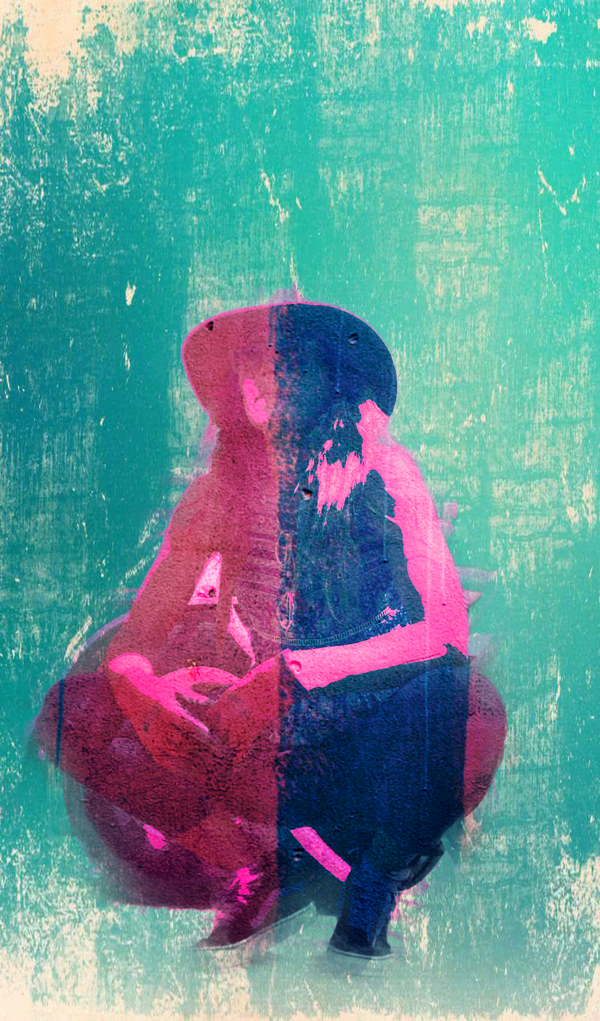 Too tired to do anything else but write another blog — today’s deadlift workout came too close on the heels of yesterday’s squats, so I only got one set 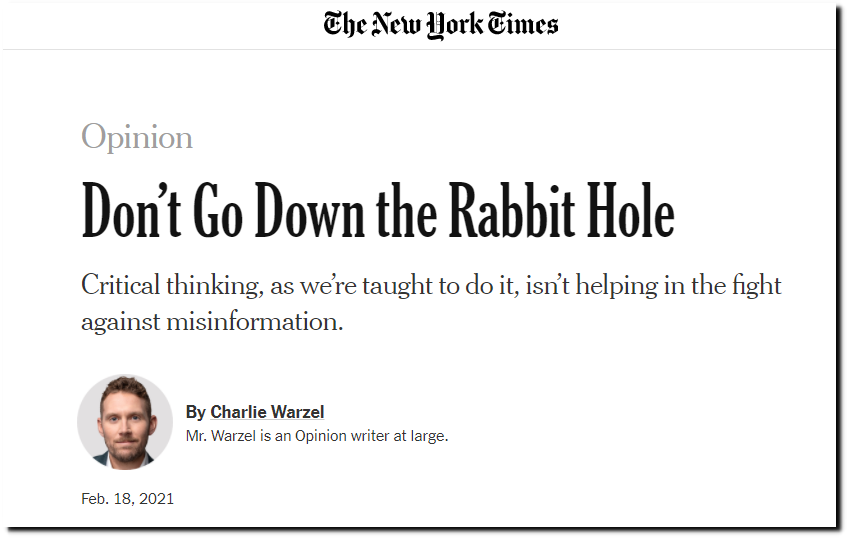 This morning I am half-tickled, half-appalled about the New York Times’ article, Don’t Go Down the Rabbit Hole: Critical thinking, as we’re taught to do it, isn’t