I’m glad I adopted blogging, as a written form, when I did.  The worst thing for a writer is when the project isn’t as relevant when you finish it as when you started, because of circumstances changing, internally, externally, or both.  I can’t imagine doing something long form right now and hoping to have it remain relevant the whole time haha :-/

It feels like the pace of everything is just spinning up and up, faster and faster.

That might be the meditation for today, now that I I squint my eyes and look at it.  I think the world could use some good solid sacred feminine energy right now.  Not crazy ass triggered bitch shit, but Gaia.

The asylum is so big, it holds all the crazies lollll.  Sorry, I broke my own spell.

I’m gonna tell you something.  When I need strong, serene, comforting feminine energy…I don’t know where to go.  I had my eyelashes fixed up yesterday at a new salon, and it was this Vietnamese lady named Katie, okay?  She was kind of a baller — owns the salon and also flips real estate in a low key way, sounds like.  She lifts, too, and is very strong — it was obvious just from how she looks and moves, and her freaking banging body and and really great ass in yoga pants.  Plus, in her little eyelash room, I noticed a bottle of some type of gym-bro supplement peeking out from the supply shelf — it had the ubiquitous super shredded muscle guy on the label.  She’s fifty, and looks twenty nine.  But even better than all that — I had my eyes closed for almost the entire time we were interacting, of course, and it was so easy to talk.  She seems neurosis-free, can allow subjects and perspectives to come and go easily, can match funny stories with funny stories, listens carefully, doesn’t get too hung up in the customer/proprietor roles — just really alive and vivid and easygoing.

I appreciated all that.

I guess I wish I had a mom sometimes.  It’s shitty how we all blame everything on our mothers, seems like, and the older I get the more I’m like “goddamn they have a lot to hold down”.  I guess if I’ve blamed one thing on my mother, it’s that she made me allergic to upsetting people, so instead I’ll offer lip service while keeping the exit in my periphs and backing away.  So I guess the one thing I want is a female that is bigger than me — big enough to hold all my emotions and moods and highs and lows.  A female that isn’t rattled at all by anything I say or do, which therefore makes me the junior, the subordinate, the mentee not the mentor.  And that would feel like rest.  That would feel like safe, like home base, like taking off my bra and just being whatever shape I am.

I think it’s unlikely, at this point, that a physical person will enter my life and exhibit these characteristics.  So I guess this is a…a step forward in at least identifying something that feels missing, has been feeling missing for a long time.  I wonder if this person, this influence, is missing in a lot of people’s lives.  I’m mentally cataloguing the Top 40 Female Archetypes and this one isn’t frequently played.  I don’t know any girls that are like, “I’ve really been working on my Presence.”  Except me, lol.  I have, actually, been working on my Presence.  It’s two steps forward, one step back, or maybe the vice versa of that.

I’ve had this fantasy, off and on, for so long — okay this is really embarrassing, I’ve never told anyone this and now I guess I’m blogging it — and I’ve never given it a lot of emphasis, it’s not even a fantasy I’ve cultivated, or tried to have.  It’s just there, like…living in my mind when it’s restful, type thing.  I’ve had this fantasy that I live in times that are more primitive, or tribal as it were, and instead of following the normal female life path of youth, marriage, childbearing, family raising, home making, grandkids, death — you know, that one — instead, I have a life path where I exist outside of that, in service of some sort.  I have female teachers who are older than me, and they feel so good to be around.  Because they recognize me.  They see the shape of my soul and that I’m in the right place, at the right time, on the right path, for my natural inclinations and abilities.  So nothing feels like an “effort”, really.  It’s just that living the wrong sort of life, for me, that of the average woman in other words, would feel like an effort.  And the average woman would experience my life as an effort.  That’s why being recognized by women older than ourselves, and seen for what we are, and guided accordingly, in a world where there is a place for every shape of soul, is so helpful.

And in this fantasy, it’s not a patriarchy, where I either have to be in service to the masculine as a wife or as a nun.  And it’s not a matriarchy per se.  It’s just balanced.  And I’m part of the balance.  Me, cultivating my interests and abilities, is part of that balance, *not* an upset of that balance.  That feels so good, in the fantasy.  And it’s not sexless either, or if it is it’s my choice, not part of a built in design.

And it’s unclear whether I can do magic, or it’s only interpreted as magic, or being part of the balance is the magic, or who knows.  But it has a lot to do with Presence.  I’m someone that everyone, anyone, can come talk to, and say anything with utter honesty, and it’s safe because it’s somehow, by definition, outside of repercussion.  Which is all the magic anyone needs, right?

And I know — it sounds like I should immediately pursue some kind of real world counseling credential based on my inner vision.  Well, I did pursue military chaplaincy, but it didn’t work out.  Long story, but essentially the entire process hinges upon an entirely unnatural moment when you have to claim what exact date and time you were saved by Jesus Christ, which is not the deal for me, and I’m not gonna go into an authenticity field, still surrounded by the embarrassed aftermath of the big fucking lie I had to tell, to get there.

I don’t know what this means, exactly, but at least I said it out loud.  I feel hungry to be around older, or at least spiritually older, women, who of course have personalities as a side effect, but that’s it.  I’m feeling a little exhausted by personalities, I suppose, probably mine most especially. Or — the worst part is having to have a personality at all, as a dominant trait, because I’m not naturally aligned with a role that matches the shape of my soul, whatever that is.  I’m at the age where I should probably be functioning in this capacity for younger women, but I feel like I never really got my time.  I never got to be the younger one, recognized and calmly accepted by an older female.  My aunt Loretta was probably the closest.  I miss her, and I notice I’ve been missing her more and more lately.  And Nick’s mom feels really good for me to be around, although I think she’s still a little concerned/amazed about what kind of animal I am.

So maybe the world could use more serene sacred feminine Presence, or maybe I’m just projecting, and it’s only me.  I don’t want to feel big or powerful or significant.  I want to be dwarfed by the enormity of something so stable and wise that it just doesn’t matter what I do or say, and I might as well go to sleep, or make arts and crafts.

If the universe were to respond to this request in meme form, it would be the Pawn Stars meme, and the caption would read:

Best I can do is Kamala Harris.

It was my brother’s birthday, yesterday, and after saying we were going to all celebrate it on Friday just for convenience, it turned into a party anyway!  We only 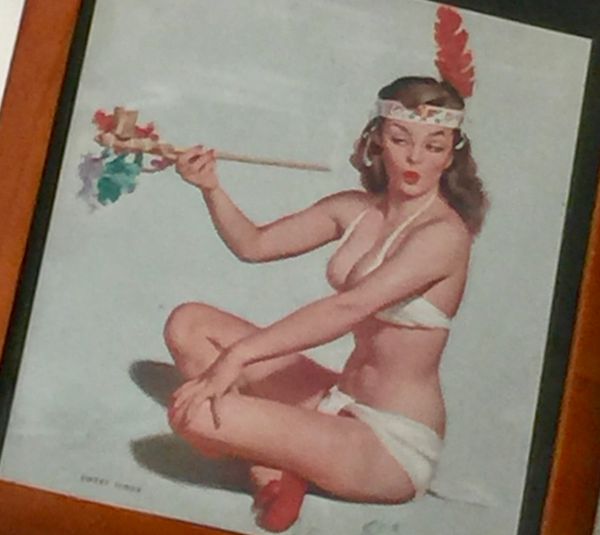 Sigh.  I’m going to say something, and to anyone who knows my circumstances a little more personally, it’s going to sound like I’m taking something private and