Well, my video blogging is off to a rocky start — my production values are shit and I already had 50% of my creations banned by YouTube with a warning that they’ll take down my channel next.  The joke is on them, in the sense that I’ll just go to Bitchute or Rumble.  I am kind of curious what would happen if I posted a makeup tutorial to YouTube, where I haphazardly apply an array of products to my face while offering a constant diatribe about how totally fucked the Deep State is right now.

I feel a sense of rage, but it’s not volatile rage, or irrational rage, or violent rage, or a rage that destabilizes me in any way.  It doesn’t even interfere with my quality of life — Nick and I and the little dogs just had our best day at Waipio yet, this morning.  That’s the black sand beach near our house, accessible with 4WD only, by the way.  We met a very barbell couple down there.  You can tell other barbell people because of how nice their bodies are.  Both off-season fitness competitors, as it turns out, and we’re going to keep in touch.  Anyway, yes, I’m okay with my sense of rage.

And what is my rage, as it were, about?  Well, I don’t know.  Let’s just free write and find out, shall we?

Okay true story: Nick and I wanted to watch something on YouTube together on like our second date, but he suggested we use my computer and I suggested we use his.  This had to do with his interest in social scientist Jordan Peterson and my interest in relationship coach, Helena Hart.  Now, both of these subject matter experts are influences I proudly claim, these days, but no one gets anywhere on YouTube without having some click-baity ass titles.  So basically Nick knew that the second we loaded his YouTube account, the whole thing would be splashed with “JORDAN PETERSON DESTROYS FEMINISTS” etc; and I knew the second we loaded mine, it would be splashed with “SAY THIS WHEN A MAN IS PULLING AWAY” etc.  Not a good look on a second date, for either of us.

I forget who jumped on the grenade but anyway fast forward, I fell in love with Jordan Peterson.  Well — Nick also, obviously, but Peterson in a different way.  I’d been listening to Teal Swan for years by now and those two are essentially the same person, doing the same work, just in two different fields.  And the work that they’re doing is the answer to the question, “How can I best develop myself as a human being and contribute the absolute most to the world?”  And what that work frequently looks like is, for JP, absolutely annihilating the claims of the identity-politics-besotted Left; and for TS, completely overhauling the collective neurosis of the spiritual self-help world.

My brother Abe and I have been on the same spiritual self help trajectory for years — actually for lifetimes, according to his own soul’s account, in a life-between-lives hypnosis session years ago, lol — and so I sent a link to a JP talk I particularly enjoyed quite early on.  Abe texted back something along the lines of, “Hey just FYI this guy has apparently gotten on the radar for hate speech about trans people so idk if you want to reconsider”.  I now remembered I had heard something of this, then forgotten all about it in the face of JP’s scintillatingly clear, kind perspective, and so I now researched it.

Well, it turns out Jordan Peterson had enraged his then-employer, the University of Toronto, in 2016.  Everything was going to compulsory speech regarding trans people and their chosen pronouns, then, and Peterson was saying that, while of course he would continue to be polite and respectful to his students and peers, he wasn’t going to accept this encroachment, by the university or the government or anyone else, of his rights to free speech.

His colleagues accused him of being alarmist and engaging in slippery slope fallacies.  “Free speech is not just another value,” Peterson responded.  “It’s the foundation of Western civilization…I’ve studied authoritarianism for a very long time — for 40 years — and they’re started by people’s attempts to control the ideological and linguistic territory.”

Oh, for chrissakes, I thought.  Painting him to be “anti-trans”, characterizing any of this as “hate speech”.  My fucking god.  And, you know what?  Maybe he is an alarmist (I thought to myself, in 2018).  I’m sure those totalitarian meltdowns in the good ole days probably did get started that way.  I really doubt we’re in any danger of that here, and now, but hey — give the guy some credit.  He’s standing up for his values, and good on him.

So, relayed all that to brother, brother became a fan of JP as well, and here we are.

Here we are.  January of 2021 and I’m wondering if I can make a video blog look enough like a vapid makeup tutorial that it won’t get taken down by the censors because my right to free speech, everyone’s right to free speech, has miraculously evaporated overnight — except it didn’t happen overnight, did it?  It happened one little deliberately encouraged, slightly  distorted, but seemingly good intention at a time.  Just like boiling frogs in water — it only gets turned up one degree at a time, so they never jump out!  Turns out the only slippery slope was the exact one Jordan Peterson was warning us about.  And as usual, as per the Leftist playbook, he was accused, and with maximal emotion and butt hurt, of exactly what they were actually doing.  They were slippery sloping.  They were sowing hate and discord and division.  And every university-trained, mush-brained social justice warrior fell for it — and probably due to the same white fragility they all went around accusing everyone else of.  ‘God forbid anyone think I’m a bad whitey!’

Nick put it this way: “It turns out everyone was far stupider than they even needed to be, for this plan to work.”  I just feel certain that, whatever level of resistance and pushback the Deep State was expecting on this front, what they actually encountered was far less.

So, I’m fine.  In fact I’m about to make some cornmeal and chili crusted tofu, to go along with the southwestern corn casserole and tomatillo mole sauce I threw together this afternoon, after Waipio, and do some more romance novel narrating, and continue to go about my business with my super sexy boyfriend and wonderful family and amazing little dogs here in our Hawaiian dream life.  I have been tuning in to Simon Parkes like a fiend, and I suggest you do the same if you want to know what the fuck is going on because the entire severity of the situation is predicated upon a completely defunct, compromised media, endlessly shitting its pants about one thing, ostensibly, while shitting its same pants about the exact opposite thing, secretly, and the cognitive dissonance and sheer ineffectualness of it all is about to cause its either dramatic collapse or entirely anti-climatic collapse, but either way a collapse, because collapsing is what houses of cards do.  I find it annoying, to say the least, that anyone anywhere remains bamboozled enough to continue justifying this overt coup on the basis of Trump Derangement Syndrome, but every time I think we’ve been delivered a shock so large, no one could possibly continue to sleep through it  — they sleep through it.  Unbelievable.

I mean, I get that they think he’s a maniac and so any and all means of restraining/restricting him are warranted, here in his “last days of power” (and there’s even a fake news rumor he resigned today)?  I just don’t get how people faux-reconcile in their minds the fact that he was in the world, functioning very highly and accomplishing all kinds of things, for decades prior to 2016.  And I know, we’ve created a marxist brainwashed academic climate of people who hate wealth, success, capitalism, and the American Dream generally, so I get them not resonating with what Trump accomplished prior to his bid for presidency — I say this as someone who has, in fact, been subjected to hearing trust fund ragamuffins argue that it’s actually selfish for anyone to have both a home AND a car, people should be altruistic enough to choose — but even given that, I don’t understand how anyone thinks a perfectly functional person — even unusually high-functioning, one might say — becomes, in four years, a deranged mental patient who is endangering us all.  And even more confusing: how is he, at the same time, both low-functioning enough to justify and even necessitate the dismantling of our core Constitutional rights, such as freedom of speech, as a means of straitjacketing him; while at the SAME TIME being high-functioning enough to truly endanger anyone, let alone everyone?  Like, how does this narrative work in people’s brains?

I’ll admit: I’m not Christian, so it’s no skin off my back that I essentially don’t understand the primary story of Christianity.  But if I was going to convert, for instance, I would want someone to explain to me how exactly it works that Christ died for my sins, but I’ll still go to hell if I sin.  I feel like one or the other makes sense, but not both.

So yeah, if I was going to convert to the religion of TDS, I would want someone to explain to me exactly how Donald Trump is, simultaneously, this hopelessly disoriented buffoon, AND this diabolical maniac.

Chances of my conversion to Christianity or TDS are quite slim, as my expectation of anyone being able to clarify the premise of either is non-existent, so all this remains rhetorical, but the totalitarian takeover of my fucking country is looking a lot less rhetorical by the minute.

In my censored video blog I shared, among other things, an excerpt of an interview with Catherine Austin Fitts, which I will again recommend here, and the part I particularly wanted to show you is cued to begin when you click, at 14:24.  It’s all about the consolidation of wealth.

And on that note: it’s time to barbell.  And then make chili cornmeal crusted tofu.  My new lifting belt came and I got lifting shoes for Christmas so it’s game on!  Just going about my life, subscribing to unpopular ideas that make perfect sense if you think about them at all: barbell, veganism, and constitutional rights mattering more than anyone’s feelings.

One more thing: the students at the University of Toronto complained that Jordan Peterson’s refusal to acknowledge the government’s right to mandate compulsory speech was “unacceptable, emotionally disturbing, and painful”.  I may have already had a reasonably healthy red flag response to people attempting to become the arbiters of others’ freedoms based on advantageously hurt feelings?  But this totally fucked situation has opened my eyes to a whole new level of emotional vampirism.  May they all wake up in Guantanamo.  So say we all.

Oop! One more one-more thing: don’t be trippin’ about Bitcoin. It had a nice run. Now it’s having a nice correction. Sound like we’re low-key at war with China and they have a bunch of the mining operation going on there and fuck if I know what that means for the market. I’ll tell you one thing for sure, though: as the evidence of consolidation/centralization and its consequences gets uglier and uglier, I’ll put my money on decentralization every time. Not figuratively; literally. Think what you want and we’ll see what moves where.

All kinds of crazy shit in America and it’s goin’ down!  During my 12 years in the National Guard, I obviously hoped I never had to shoot anyone, but 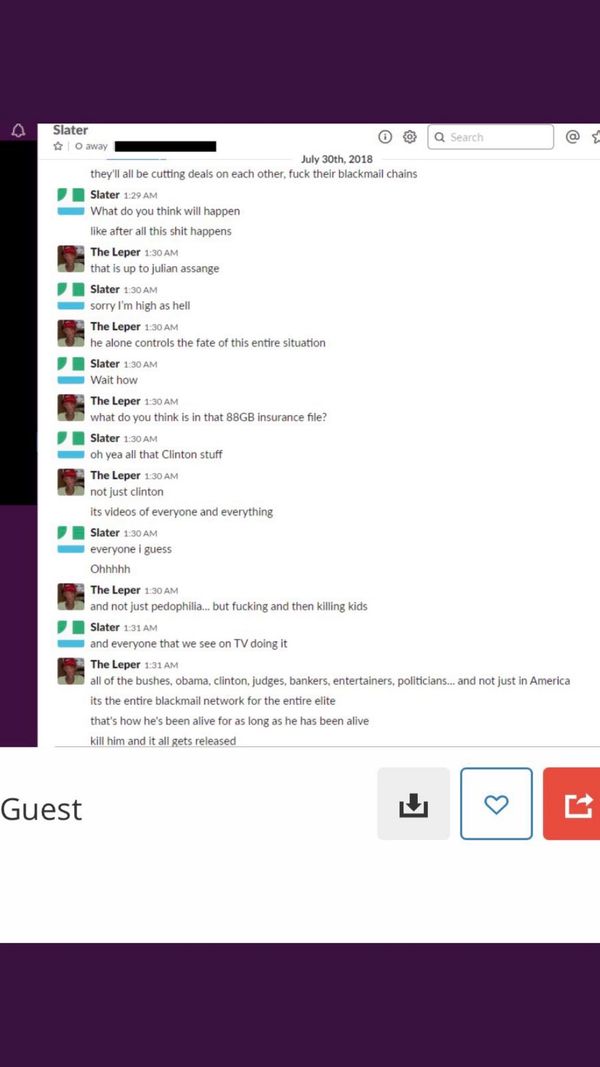 I’m popping back in, tonight, for a quick blog.  I wanted to just say something clearly, since it’s danced around at best or invisible at worst.  There’s