You know what’s funny?  Abraham Hicks sometimes refers to the Law of Attraction as, alternatively, the Universal Manager; an intelligence handling the actual logistics of events coming to fruition, in other words.  So, in light of that: definitely the scariest part of 2020, for me, has been rumors of a *mandatory* COVID vaccine.  I’d assume this year has demonstrated enough dire literary foreshadowing that no one would trust that, but of course I’m way off base.  Many people want the vaccine.  Some of them genuinely want it because, against all odds, they believe they’re safer with it than without; others’ behavior is governed purely by the mysterious inner dictates of Derangement Syndrome — which is really just old-fashioned contrarianism, the mental shortcut favored by codgers since the dawn of corncob pipes, but now updated to entice the sleek, young, urban woke.

Letitia Wright, the gorgeous actress who starred in Black Panther among other things, recently deleted her social media following backlash in regards to her share of a video exploring the emerging sinister implications of the vaccine’s rushed production and the total legal immunity on the part of its manufacturers, regardless of any and all side effects or, for that matter, effects.  Well — I didn’t watch the specific video she posted, but I can only assume it was about that, since those red flags represent the very tip of the sinister implications iceberg.

Here are some of the responses she received on her social media, with spelling/grammar errors intact:

“Getting cancelled” isn’t a thing.  Repercussions for being a moron have always existed.

I mean this with the most disrespect. fuck you!

Yeah y’all can go ahead and recast her

I’m not gonna mince words.  Was a huge fan from Black Panther.  Now I hope @MarvelStudios fires you and replaces you.

you’re an anti-vaxxer shut the fuck up

You deserve to be cancelled.  Here’s hoping @[xyz] cuts you lose.  You’re a HORRIBLE example for children everywhere

Marvel needs to fire her

It’s not about cancelling.  It’s about the fact that you are harming other people by not getting vaccinated

anotha one.  Lets goooo.  Weed out these scum

just shut the fuck up, you moronic transphobe

Racist, homophobic, transphobic BITCH IS WHAT YOU ARE.

Honestly, fuck you for using your platform to put out this uneducated bull shit.

Today I learned scientific facts are popular opinion. Sit your uneducated, dangerous self the fuck down, you stupid cunt.

Science is not “popular opinions”, you dumb bitch.

literally shut the fuck up

You’re a piece of shit Trump supporter, a transphobe and anti vaccine.  And you’re so dumb that you think Biden is the anti-Christ just because your favorite racist president didn’t get re elected.  Kindly shut the fuck up

fuck you and your transphobic ass

fuck you  anyways,, support trans rights, vaccinate your kids, and climate change and evolution are real

“I want to share transphobic antivax conspiracy nonsense but people get mad when I do : ((((((((“  dumb bitch  cancel culture doesn’t exist

Shut the fuck up transphobic trash

if you’re gonna spread shit like that just stay ignorant by yourself, shut the fuck up

I could have just shared the image but I felt like actually typing these out.  We did that in grad school a time or two, in creative writing workshops.  We’d hand copy a particularly compelling passage by a recommended author in order to mentally “feel” the contours of those thoughts more clearly.  So yes — I wanted to really feel the contours of these thoughts.  They felt like the ravings of permanently damaged psy-op victims.

The most upsetting part is that Ms. Wright issued a bewildered apology before ultimately deleting her account.  I hate it when they do that.  How are we, as spectrum of generations right now, so bad at recognizing and dealing with bullies?  You give them the middle finger salute and check the fuel level on your flamethrower.  It’s the only way.

Anyhoo, back to my point: the Law of Attraction.  It’s mostly associated with airy fairy exhortations to create your own reality and go ahead and daydream about that new car/house/lover, etc.  But in reality, the Law of Attraction is a stone cold motherfucker.  It is the Universal Manager, and it connects us to our those outcomes we’ve made inevitable for ourselves, through offered thought and belief.

In general, I have considered it a theoretically tragic event if the vaccine should be as…ummm…DNA-altering as they say; as irrevocably neural uplink harnessing, as it were.  As liable to technically render us GMO’s, and therefore, idk…patentable?  I was concerned with what is looking to me, more and more, like an effort to not only disincentivize but actually eradicate spirituality and the spiritual impulse.

Maybe that sounds crazy — probably not as crazy as calling a very nice woman a moronic transphobe for being leery of a rushed vaccine in response to a virus with a 99.997% survival rate — but remember back in September, AstraZeneca halted trials for the second time, after the second incident of the experimental virus causing neurological damage, this time in the form of the woman exclaiming, “They’ve killed god; I can’t feel god.  My soul is dead”?

And remember, too, Operation FunVax, back in 2005?  I don’t know if they got it off the ground, but I discussed the video of this briefing before, where a douchebag in a collared shirt explains to a roomful of other douchebags, in the Pentagon, that CT scans reveal the neurochemical MATV2, associated with desire and intention, heightened in people who self-identity as “religious”.  He informs them that a strategic impairment or even destruction of MATV2 could theoretically be delivered to — you know, Muslims, or like, whoever — via a vaccine proscribed in response to an intentionally-released, aerosolized respiratory coronavirus that most people are immune to anyway.  I’m not making this overly specific shit up; watch the video.

In 1017, Rudolf Steiner wrote, “Certain circles in this materialistic age are striving to paralyze and make impossible all of humanity’s spiritual development through causing people by their very temperament and character to reject everything spiritual and regard it as nonsense.”  This is not because those “certain circles” themselves regard spirituality as nonsense; au contraire, they avail themselves of ritual magic and suggestion at every turn, but they don’t want *us* to.  If the control of large groups of people were to be compared to shoving them into large deep pits, then spirituality represents everyone’s inherent ladder back out.  If they can convince us spirituality is nonsense, then voila — no ladder.

In light of that perspective, consider this gal’s short video I came across.  She says:

So I feel like we’ve been programmed to think that, if we are in a war, we’ll be seeing mass destruction and chaos happening all around us.  But I think that we surpassed the time where guns and missiles and violent weapons are the best form of warfare.  There are many different types of warfare that would be a much better fit for the time that we’re living in right now, and we are currently in an age of information.  So hypothetically, if we were to be in World War 3, it would be a war on information.  People wouldn’t be dying left and right because the people in power wouldn’t resort to that since we are their main source of money and power.  It would be a silent war, a war on consciousness where people can be enslaved mentally.  And a lot of people wouldn’t even realize it because they are fully engulfed in this intricately planned-out illusion full of distractions and lies, where they are being killed slowly with biological warfare, putting food and medicine in their body that’s actually just poison and dumbing them down.  And they are so caught up in distractions in this constant state of fear and worry that they don’t even realize they are fighting a battle that they have to wake up in order to win.

Hm…who could she be talking about?  Maybe, idk, people confidently tapping into their keyboard things like, “Sit your uneducated, dangerous self the fuck down, you stupid cunt”?

My point is not to say that I grieve for these wokes who have lost their way, lost their ladder.  My point is to say: oh, shit!  I guess I shouldn’t have been so worried about this vaccine on behalf of humanity.  Turns out there are plenty of us just looking for the next corral to be herded into.  Diligently stopping for directions, in fact — “Excuse me, I’m headed to Auschwitz and I think I made a wrong turn; is it just up the road, here?  I’m worried I’ll miss my check in appointment with the gas showers.”  I know that sounds like a dick thing to say, but that’s why I wanted to actually type out those comments, and “feel the contours of those thoughts”.  I’ve felt them and now…I think the Universal Manager is going to help us all get where we’re going.  I really do.

One more thing: John Ward, British author of The Slog: A Cognitive Dissident, shared this capture of a UK government solicitation in his Nov. 20 blog Labour — J’accuse!:

Translation: regular ass intelligence isn’t expected to keep up with all the adverse reactions from the COVID vaccine, so they’re urgently requesting some artificial intelligence backup.

So frankly, I’m anticipating a scenario in which Letitia Wright hangs back, following the release of some initially incentivized but not overtly mandated vaccine (they always softball their bullshit first because that’s how you make crazy shit seem normal to people who aren’t paying attention; the bamboo sticks can always be brandished later), and all these people who told her to EDUCATE HERSELF rush to their local FEMA camp, to get it.  And somewhere, some overworked, underpaid AI will be so busy crunching the adverse reaction numbers that Letitia will soon have cause to thank her lucky stars she followed her hunch — cancellation and all.  You can get a new career; you can’t get a new DNA.

So yeah.  Let’s to each our own, shall we?  The Derangement Syndrome-Impaired among us are excited to see what tragedies befall the disgusting fascist transphobe moronic anti-vaxxers.  The least we can do is return the favor.  Let’s just see what befalls whom.  Ideally none of it would befall any of us, but…damn.

PS: I’ve taken a deep dive into the perspectives of Abraham Hicks, Teal Swan, and Jordan Peterson because I was active as a commercial driver for the last many years and listened to their YouTube channels and playlists on repeat/auto-shuffle for thousands and thousands of miles, all across the country. There’s a lot of stuff to listen to on the internet, but I found these three, specifically, to offer some of the most consistently thought-provoking, fascinating, helpful, and compelling material imaginable. Highly recommend. 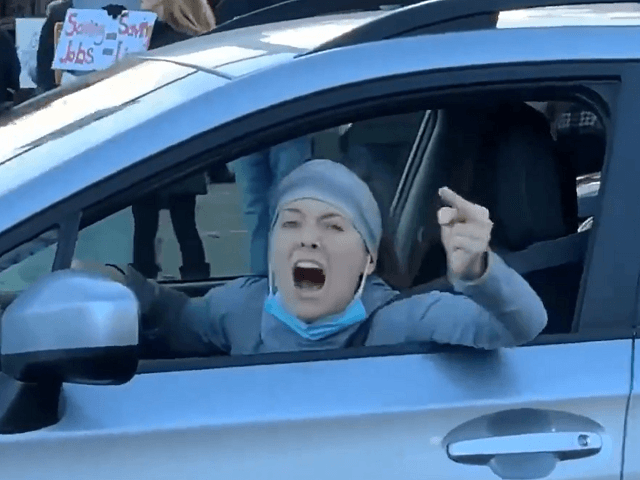 Here’s a crazy thought: let’s say we’re successful in retaining our country and its Constitutional basis.  Let’s say a couple years go by and, in hindsight,

I have some travel in about a week, and then Nick has some travel the week after that to see his family for Xmas (too expensive for us both to