Let’s imagine what it’s like to be my tiny white dog, Buffy, relative to people’s energy in the world.  We’re together all the time, whether at home or in planes trains and automobiles, all over the country.  She’s reluctant to be separated from me, even here at home (ie Daddy trying to take both dogs to pee because Mommy doesn’t feel like getting up right now), but if we’re traveling, she’ll become anxious losing sight of me.  As long as she has me locked in, though, she’ll sleep for eighteen hours no problem.

So that’s how she feels about me; what about everyone else?  Well, she assesses each new person like it’s a brand new thing.  She seems to enjoy CALM children, but she’s a bit wary as they have a tendency to pick her up, hold her, and not put her down — little girls especially.  She shrinks from loud or chaotic energy; yelling/running/playing kids make her magically vanish.  She abhors chaotic energy in adults too, for that matter, whether in earnest or in jest.  When Nick and I argue, I think it’s harder on her than on us, something we’ll both belatedly realize after the fact.

One thing she really enjoys is being taken around to meet new people, in nice calm environments.  So, I got us all trained (or…sort of, you know) and certified up to be a pet therapy volunteer team, a couple years ago.  We were on the list for Therapy Pets of Northern AZ and I’d receive optional assignments, in my email.  Dream job!  Just wish it paid!  So, she and I would show up to wherever — a hospital, clinic, library, college campus, corporate office, whatever — obviously anyone could request therapy dogs — and go around and make everyone feel really special.

Buffy was a natural at this job.  She creeps up, head hanging like a tired daffodil, allowing herself to be pet if they reach far enough…then she creeeeeeps in, a little closer…then she looks around and identifies the next person who might need to pet her and starts creeping over that way…ultimately including everyone, UNLESS they exhibit chaotic energy.  Some people she would gravitate to with extra fervor, and want to stay with them a long time, you know?  People that make her feel extra special and extra safe.

And that’s how I know she’d love Kamala Harris.  That calm, soothing laugh — it would really make Buffy feel safe, empowered.  And the healing, non-chaotic energy which is an essential characteristic of her race and gender; I mean, you just can’t argue it.  Whatever her race and gender is — and I’ve been led to believe those are actually quite complicated questions, except when it’s Kamala — anyway, whatever it is, is guaranteed to have the effect of an elixir on Buffy, on the nation, on the world.  I can say this with perfect confidence because every other person I’ve met of her race and gender embodies those unifying characteristics.  Because, as we all know, consistent characteristics are how race and gender manifest — dark-skinned female people have consistently good characteristics, and light-skinned male people are the ones who assume others have characteristics concretely related to their race and gender, and that’s why their race and gender is definitely bad and not good for the country.  It’s these old white men that have been ruining everything, energetically — like Kamala’s running mate, Joe Biden — and you know, Buffy picks up on that kind of thing immediately.  In fact, Buffy’s never met an old white man she didn’t immediately bite — because she’s not a racist.  She understands that old white politicians are racists, though — except for Joe Biden, who is demographically redeemed through his partnership with what is universally recognizable as a modern embodiment of Gaia, Isis, Minerva.

It’s so nice, finally, to have cut through all the static and to just, as a nation, acknowledge that policies and career alliances and following the money and, gosh, even the things people *say* on camera, are just too complicated to ever stand a chance of uniting us — because we all interpret people’s personalities differently, and that’s sometimes because we’re racists.  So the touchstone to which we must return is, ironically race, preferably aligned with gender, except when someone’s race and gender makes them a traitor, because of the things they say, like Candace Owens, who is just a damn Uncle Tom and I’m certain Buffy would immediately sense that.

So it makes sense to me, when I scroll a thread and see people’s heartfelt, celebratory comments, in the wake of the totally incontestable election results.  “Our first black female VP — literally sobbing rn.  [series of blue hearts]”.  We have all been deprived of the exact sort of energy, in our political system, that Kamala embodies, and we know she embodies it because, in our racism-injured nation, she can’t possibly be racist, because she’d have to be racist against herself and no one would do that, because racism only works in one direction, and in itself represents our greatest threat and our greatest shame, and since Kamala’s race and gender would locate her at the bottom of the totem pole according to any actually racist mental hierarchy, then moving her to the top of the totem pole means that we’ve defeated racism, and nothing about that entire mental maneuver is remotely racist.

So, I know it can be confusing, especially knowing as we all must that most of our reactions, thoughts, and feelings, watching the news, are racist wolves in sheep’s clothing, especially if we’re white.  We need to all investigate the reflexive race-injury tendency of our impulses to say things such as, “Seems Kamala actually broke the standing record, in California, for how many young black men anyone ever incarcerated,” and, “Seems Kamala was more interested in taking legal action against whistle blowers who discovered Planned Parenthood was selling aborted baby parts on the open market, than against Planned Parenthood itself for monetizing dead babies.”  We need to check our privilege, when thoughts like this occur to us, because they don’t come from the right place.  And what I mean by that is, we can’t think clearly about anything at all if we’re not the right race and gender, and by “right” I mean wrong, which is why we need to all stand behind our strong, healing earth mothers right now, because they’ve been wronged by our patriarchal system, and that’s what makes them right, right now, whatever they say.

I mean, think about it: so many babies will be named Kamala, after our first lady president, obviously not the aborted ones, but these are the exact sorts of hard choices that powerful women of color everywhere have been faced with, through history: how to put food on the table, provide for everyone, represent strong nurturing motherhood, and stimulate the economy with dead baby parts.  It’s racial privilege, pure and simple, to live a life free of these hard choices, and to imagine something as complex as whether to sell dead baby parts or not can just be dictated for others against their will.

I know it can get so confusing, the more you look into it, which is why I always return to Buffy’s perspective.  Buffy is an expert energy reader, and since we’re not open to actually considering people’s policies and platforms as representing the bulk of their fitness, or not, for public office, and we’ve all agreed that the ineffable energy matrix of race and gender is truly what matters right now, then I really have to defer to Buffy’s political judgement.  She could hear that laugh from a mile away and come running into Kamala’s arms, I have no doubt.

CNN is running this headline: Alarm Grows Over Trump’s ‘Dictator Moves’ As He Denies Election Defeat: Trump’s administration looks like a tottering regime, with attacks on the military 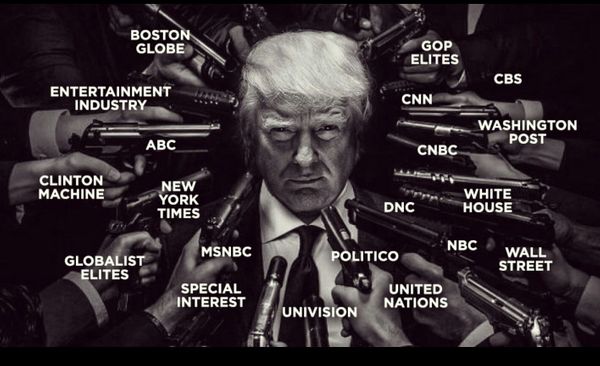 For most of his life Trump was a media darling. He had numerous cameos on TV shows and movies, he was the star of a reality TV show, reporters loved