One of the most tragic and self-sabotaging demeanors I’ve ever encountered is the old “permanently not impressed” schtick.   A person afflicted with this has identified the characteristics most endearing to most people (happy fun wow), yet has amazingly decided to pretend the opposite.

So, who do we ALL love?  Dogs, and children, and happy people who show their surprise and gratitude for new things.

Why do we love them?  Because they remind us of the magic in the world, the honest fun of living.

Who do we hate?  Scornful, snooty, bored, brittle people, who experience all their own emotions through a distancing strategy of phoned-in sarcasm.

Why do we hate them?  They literally suck the magic out of our world.  They make us feel stupid, and less-than, for being interested, excited, intrigued, by anything.  We naturally tamp ourselves down to their level of stale, because any emotionality about anything put us in the crosshairs of their withering disdain.

Now, if these people were just haphazardly sprinkled through the population like grains of pepper, I wouldn’t bother to comment.  But they’re not.  They’re kind of everywhere, in charge of firmly mid-level things, because this demeanor in itself exerts such a sense of superiority over fresher ways of being that others, around them, will tend to reign in their own natural enthusiasm.  You can end up with entire organizations that feel this way, if you’re not careful.  It’s a highly transmissible disease.

What an odd topic for a blog, right?  We’ve got a problem with it in this country, though, particularly among those who should be our best and brightest.  It’s a spiritually dangerous posture because it causes us to be magnetized to the worst in ourselves in others, and repulsed by the best in ourselves and others, and generally get oriented backwards of our own stream of abundance and personal growth.  Show me anyone genuinely trying to achieve anything, and I’ll show you a peanut gallery of jagoffs, exhibiting a pretense of sophistication they associate with whatever jagoff last pretended even more sophistication, who would never be so tacky as to try to accomplish something.  It’s an old-money attitude, surprisingly well-adapted by no-money people.

It makes me wonder, do we have that much of a hangover from our nation’s rejection of an aristocracy, here?  In any case, now is as good a time as any to share one of my favorite personal growth tools.  It’s a list of basic emotions, ranked highest-vibration to lowest-vibration, thusly:

Apropos of this blog, one thing you can do with this scale is identify the range traversed by your friends, when you all get together, or your coworkers as a whole, or whoever you hang out with.  Accept that the higher emotions feel better and allow more abundance than the ones further down the scale, and notice as you read through them if you feel that anything above a certain set point seems “tacky” or likely to result in withering disdain from your partner or friends.

If left to our own devices, we certainly have the ability to climb the emotional scale, over time, if we simply allow that to occur and insert strategic naps, but that’s not the focus of this blog.  The focus of my blog are those of us who talk ourselves down, and keep ourselves down, in the more apathetic emotional realms, for no other reason than that some asshole somewhere made us think that’s what we have to do to be cool.

Here’s something to be aware of, too.  We all need all our emotions to be available to us, but often certain key emotions aren’t, simply because we associate the expression  of that emotion with someone we dis-identify with.  This happened to me, much of my life, around anger.  I associated displays of anger with people whose anger I disapproved of as unwarranted or uncomfortable (and other people’s anger is, of course, uncomfortable for the people around then, which is not necessarily an indictment of anger), and so I decided from an early age not to perform anger.  This wasn’t good for me and it was a big breakthrough, later on, to realize that I could express anger in a way that was at least comfortable for me, and made sense with my personality.

So I think that’s what’s going on with this trend I see, especially in academic/intellegentsia circles, except concerning emotions related to a genuine lust for life.  There is a deep classist rift in our country, essentially characterizing rural folks as emotional bumpkins and urban/educated/wealthy folks (or insert the subconscious association of your choice) as sophisticated.  Obviously there’s truth to this stereotype, as there’s some truth in all stereotypes; otherwise they wouldn’t have gained momentum.  But huge exceptions abound.  I’ve encountered many urban/educated/wealthy people comfortably in touch with their own delighted curiosity, and quite a few embittered desperados.

The word “scorn” isn’t on this list, but it’s a prevalent attitude comprised of becoming overly identified with a social identity and social connections that orbit around the numbers 8 through 12, overtly, rolling your eyes at everything, and experiencing numbers 12 through 22, covertly.  People who treat others cruelly or scornfully simply loathe themselves, and I think it’s funny that they don’t know we all know that.

I like this emotional guidance scale because it makes the subjective more objective, especially when we’re swirling around in shitty emotions as a result of circumstances or simple inertia.  And just as I discovered my own authentic way to express anger, even the most urbane among us can discover comfortable ways to express hope, optimism, enthusiasm.  It’s just that we can tend to run with crowds and influences that convince us we’re supposed to “live” on some crippled, nihilistic fragment of this scale.

Another thing worth mentioning: modern pop psychology has done a lot of damage in terms of convincing us certain emotions are “bad”.  (For instance, list all the emotions on this scale you associate with toxic masculinity or wounded femininity.  Now: never feel those emotions.  Lol!)  No emotion is a bad emotion if it’s serving to stair step us up and out of a funk, which is our natural process if it’s allowed to occur.  And no emotion is a good emotion to be stuck at.  No, not even number one, joy.  If we got to joy and stayed in joy, that would mean we’re either dead or playing the game I call “yippee skippy” where we convince ourselves we feel a lot better than we do.   No emotion is a good emotion to be stuck at, but it does behoove us to cultivate as temperate an emotional climate as possible, over time.

None of this has anything to do with the fact that Biden voters seem to be particularly afflicted by this crippling pretense of sophistication, but if you want to read that into it, you’re more than welcome.

And if you’re interested in what I felt myself wanting to blog about, but thought better of, and was certainly pleased with this blog as a surrogate, then go ahead and google the SCIF in the Eisenhower Building, and why Trump’s team monitored the voting from there, tee hee! 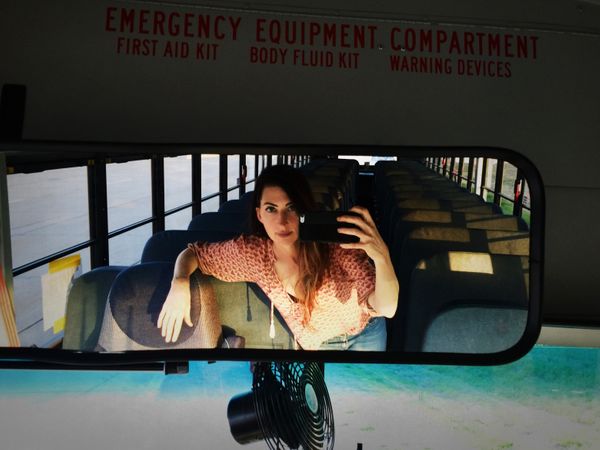 Dear Sisters, If you’re reading this, which would thrill me, I know you’re expecting a vitriolic or at least tedious experience.  I would never forgive myself if the

You know, one function of my blog (for readers) that seems to be emerging is, I’ll say the fringe-y shit people are thinking but don’t want to admit.