I thought I’d close out fire season #4 in California for once, but here I am in Laramie, Wyoming.  I think to myself, in all caps, WHO LIVES HERE, and then I remember: we did.  I was born in Wyoming.  My dad said he thought the cold here would inoculate me, and I’d be immune, but truly the opposite occurred.  Everything about this place makes me feel delighted to be flying out of here later today.

Oddly though, I’m reading a little more deeply into my own climate/temperature sensitivities, these days.  My Christian mystic friend Andrew is so good at finding deep truth in the commonplace and obvious, which is an incredible knack, and why not.  It’s a nice way of growing free food for thought, certainly.  I guess it’s a feeling of not wanting to need shelter that much, and not wanting to need to be that tough, or not in that way.

Nick and I were pounding ground stakes into the astroturf yesterday — yes, I’m reunited with him and the bugaboos, and it’s a pretty long story — and we were speculating on how amazing it is that my dad’s been fussy about Hawaii.  It’s hard to tell what that’s about.  (It’s probably about quarantine — right now Hawaii is simply a new place for him to smoke cigars on a porch.)  Some things are universal — the symbol of an arrow, for instance, or the sign of choking — and I feel like it’s not a stretch to say, the equatorial coast is the universal climate of well being for humans, or one example of it.

“My family really illustrates the point that you can become so good at coping, it simply doesn’t occur to you that you could live in a better place,” I said.

“Gah!  Right?!,” Nick said.  His nuclear family militated steadily from the swamps of Mississippi to the most desirable enclave of coastal North Carolina, so it did occur to them.

For me, all this — the cold, the inexplicable cactus everywhere, the wind, the skeeters, the sheer wild inhospitableness of it all — feels the way an old heat stroke does to people in the desert.  Like some biological reserve or buffering system has long since been impaired.

But I did have a lot of fun schlepping myself and the equipment here.  It wasn’t a family trip as usual, because Nick had to step in at the last minute and drive the chase trailer up from Flag while I brought the tractor trailer across California, Nevada, Utah, and western Wyoming.  I slept at two different truck stops en route and the weather was good for trucking.  All that is fine.  A truck is a protective bubble with a heater and a bed and a drive train, which represents a personal happiness minimum for me, and sometimes even a maximum.  And the people at this camp are so nice — it was just great interaction after great interaction.

I think I’m just tired, too.  It’s not a good time to be tired, yet, there’s still so much to do before our Nov. 1st flight to the big island, but I’m fire season tired.  It’s hard to characterize or even justify.  Contractors don’t work like fire fighters do; by appearances, we just sit around most of the time.  In reality, we do…whatever needs to be done, however it needs to be done, to make these little temporary fire fighter towns function, from set up to tear down.  It’s kind of amazing in its own way, and worth mentioning I suppose that no matter how much they pay, there’s always a shortage of people like us willing and able to pull it off, reliably, through even one season let alone years of seasons.

Anyway, Nick left in a hurry and forgot to pack Buffy’s warm pajamas, so yesterday evening found Milo frolicking around the astroturf, harmlessly savaging various hats and gloves, while Buffy stayed wrapped in a fleece blanket in the tractor.  That’s me — that’s how I would be, if there wasn’t all this shit to do.  I mean, what is even the point of being alive, when it’s so hostile out.

Anyway — given that I thought the California fire would be this unit’s last hurrah for the season, it’s a good thing I went ahead and filled the propane, and changed the oil on the generator, and packed it up where everything would be accessible to the next crew, because turns out I’m the next crew.  For a few more hours :)

Seeing Nick and the dogs was a trip.  First of all, the dogs are tiny.  I obviously know that, but they tend to grow in size, in your mind.  And then it’s a shock all over again how little they are.  Seeing Buffy again, particularly, was just overwhelming, no offense to Milo.  Milo was mostly surprised and then concerned that something about this new event would interrupt his connection to Daddy lolll.

Seeing Nick again was of course wonderful but just bizarre, frankly bizarre.  He always looks like an 80’s movie when Tom Cruise was in his prime and just stepped off a yacht.  Nick always looks like he just stepped off a luxury yacht.  Or like someone who actually just spent six months training for the role where he’s supposed to look completely unrealistically good, stepping off a yacht, because real people don’t look that way.  And not just the looks but this whole avalanche of personal charisma that tears a hole in the fabric of the space-time continuum.  Like on some fundamental level it’s difficult to really buy that he exists at all, let alone that we’re hugging and kissing in a Wyoming cactus field, with a Taco Bell wrapper blowing out of the truck.  I had tried to look extra good by way of scrubbing my face with a baby wipe earlier that morning at the I-80 truck stop and putting on cleaner Walmart sweatpants, which was all the resources I had.

Our personalities and souls are so compatible, and not just compatible but synchronous, that I get how we match.  That part is obvious.  I guess I just always thought that when I met someone who felt that way, that soulmate way…they would be uglier, I guess?  I would just not even care how they look, because it’s so easy to feel that the connection goes all the way deep.  I’ve always been good at feeling the solidity or not of a vibe, so I trust myself there.  I was prepared for that, psychologically, but then to have the person that feels that way look like him is hard to get used to.  I don’t think I’ll ever get used to it.

And you know, of course my mind is like ‘wow, Nick could have any woman he wants’, but actually no he couldn’t, because he’s just as much a slave to his spiritual instincts as I am.  It’s not about making something work, it’s about being called to that thing because of what that thing is relative to what you are, in sum evolving total.  It’s weird to find someone where everything that’s ever been right about me, and everything that’s ever been wrong about me, is instantly reframed as representing an existential relief to this other person, and vice versa.  I get scared sometimes, not that things with Nick and I will evaporate, but that somehow I will have dreamed this whole scenario and find myself only a weirdo again.  Just a fucking weirdo with most of the signals of the world not landing solidly with me, most of my signals not landing solidly in the world, feeling like the embodiment of a language no one speaks fluently.  It doesn’t matter what people look like or talk like or what they offer; it’s just such a lonely feeling when they aren’t the solution to a puzzle-of-beingness you didn’t even know you were struggling with.

So yeah, I don’t question that we came together so fast and mesh so well; it’s just weird that it happened with the most unrealistically attractive man I’ve ever seen.  It just seems ridiculous.  I’ve threatened to objectify him more publicly with a fluff blog of mostly pictures of him being domestic in various ways, but it just seems too hard to explain why he’s tinkering with massive hot water heaters in the back of a 53’ trailer or lifting up one side of a 1000 pound gray water bag.  It feels like it’s been years since we lived in a house.  ‘House’ being the operative word, but also ‘lived in’ being an important qualifier.

I just made the long trek over to the row of porta-johns and is was miserable.  I was actively miserable.  The wind is a knife and the cactus spine that went into my shoe was also a knife.  I was thinking I’d repack my luggage in more organized fashion, this morning, and make everything neat for our trip, but on second thought we need to throw our shit and our dogs in the back seat of the rental as fast as we can and get the fuck out of here.  I feel bad for the fire fighters and operational resources who actually have to work in this, but I know they’re 100% tougher than me because I don’t have a shred, not a tatter, of tough in this place.  I was not made for this.  Surprise, Dad!  Your Wyoming baby inoculation plan failed.  And my beach paradise elder parent relocation plan succeeded.  It’s up to each individual to find things to appreciate in their environment, but I’m a lot better at it when my environment isn’t literally the worst thing ever.  And the ironic part is, this is all on top of a caldera!  There’s hot springs everywhere!  So essentially the only good place in Wyoming is, like, under the earth’s crust.  Awesome.

Okay, Nick’s not stirring yet but I should get to posting so that we can get on the road when he does.  Coffee was not available to me this morning during writing operations — I mean, it was, if I were to go far enough, which I’m not — so getting us all in the car and on the road is the first order of business, and stopping for a coffee is the second.  Goodbye, fire season 2020!  The Hawaii move got funded and that’s all that matters, plus a good new employer connect.  It felt like easy money in California but ain’t no money worth this.  And good luck to Bill, our laid back Kentucky replacement guy.  Have at it. 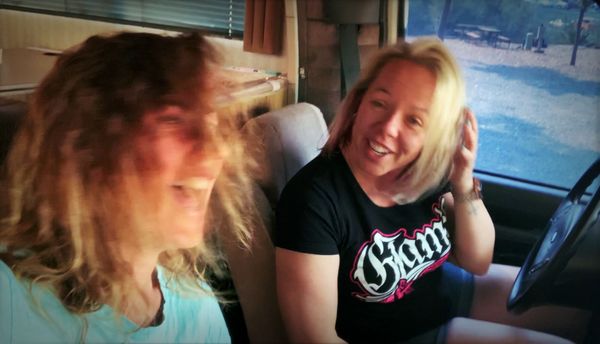 So the other interesting thing about moving to Hawaii is that it necessitates a total, unflinching scrutiny of the things we own, all the way down to the last safety

Now THIS is a special morning.  I could have slept in, I have no responsibilities until my propane delivery at 9:30, but I set my alarm for good ‘ol