Now I guess we’ve arrived at the part of the narrative where everything everywhere is blowing up.  Lots of explosions around the world, some natural like a volcano in Indonesia, some nuclear (or looks it to me, anyway), like the one in Beirut caused allegedly by them storing too much ammonium nitrate at the port.  The article I read about that actually seemed like a hastily fabricated lie, though.  “The Lebanese government was warned multiple times about the danger of the ammonium nitrate stored in quantity.”  That’s some passive ass voice, there, as we say in writing.  Warned when, by who?  Who goes and just warns countries about stuff in their ports?  Then the more extreme Q’s are like, ‘Oh, there’s a network of underground tunnels, probably it was blown up so that part of the tunnel system can’t be used for trafficking again!’  That would be in the crimes against humanity category too, if so, and doesn’t resonate with me.  Like, come on — just pour some concrete.  Social media is the new news, thank god, because someone has to be, and I saw the person’s cell phone footage of the actual physical carnage in the immediate aftermath.  People chewed up like broken dolls.  Crazy that the entire government of Lebanon is resigning.  I also read an article about that, which was also incredibly poorly contextualized and I almost felt like I knew less, at the end of it, than I did before.  Randomly and unhelpfully, I’m able to recall the my Libyan friend mentioned, one time, that Lebanese women are known to be beautiful and quite randy, as they (don’t) say in Libya.  Quite of few of the dead bodies were, somehow extra sadly, extremely beautiful women.  I can either confirm nor deny the randy part, but anyway looked like a nuke to me.  Russia had a huge gas explosion yesterday, also Northeast Baltimore, MD, USA.  Belgium, couple other places.

I had crazy dreams last night.  I was at a party and I would just calmly and mildly state a contrasting opinion or experience about a topic, and people kept getting mad at me.  Livid, like they were struggling not to attack me, and where someone else would have to come “talk them down” and usher them away from the trigger I represented.  At no point in the dream did I feel upset or like I was even doing something wrong — I mean, I wasn’t — and so it was confusing.  I was like, just argue with me if you disagree, right?  Then also (in the dream) I asked my dad for help buying an off-grid heater and some fuel, because I wanted to start getting prepared.  I think a big, happy Retriever came with the stove, so that was a pleasant surprise, and then while I was putting away those things, a group of people manifested at my circa early 2000’s house, and I was looking in my closet and trying to choose between a tactical vest and a strapless, orange floral fancy top.

Finally, right before my alarm went off at 4:55a, I was sitting in a cafeteria or student lounge, and I thought I had every right to be there, but then an official asked to see my papers!  I’m not kidding.  I told her I’d finished my first semester of guitar and was considering enrolling for my second — odd that I reverted back to guitar-student Hannah in this dream, which is many identities ago for me — and the official became sympathetic and said, “Yes, I understand.  They made it illegal for people to drive with their guitars in the vehicle so a lot of students are confused about how to transport their guitars to campus.”  I hadn’t known this, because I hadn’t thought I even needed to be a student, just to sit in the cafeteria, but it represented enough plausible deniability that I was grateful, while at the same time thinking — illegal to drive to campus with a guitar?  What the hell?  Then my alarm went off, so that’s as far as that narrative got.

I’m glad to see more and more average citizens banding together and driving out hordes of BLM/Antifas from their towns and neighborhoods.  If there was any point at which I was willing to pay lip service to “the movement”, and split the hairs of civil disobedience in service to social justice versus quantities of people just behaving badly, it’s long gone, but I don’t remember ever really vibing with that.  For my sensibilities, a mob with an arguably valid agenda would have to either be all the way peaceful, to the point that they consistently self-regulate any violent elements that do infiltrate, in order to stay on-message, or they’d have to be all the way tactical, and not in this retarded, meandering fashion.  I’m very unlikely to protest anything through civil disobedience because that doesn’t cohere with my core beliefs about how, and why, to use my energy in an outward-directed fashion — I mean, knowing it’s a metaphysical fact that energy is a boomerang, and comes back at you with the exact signature of benevolence or malevolence you put out, multiplied, then it behooves me to really ask myself, what do I want coming back at me, at 100mph?  But let’s say the complicated conditions of my involvement are somehow satisfied, and I’m willing to join in on a thing.  I would just immediately leave again and go home if that thing began to look anything like the things we’re seeing.  I mean, I’m either going to stand in a square and hold a candle, entirely peacefully, and mace the shit out of any “protester” next to me who gets uppity, or I’m going to sit up on the highest rooftop I can find with my AR15 and a previously established assessment that extreme measures are warranted, that life and property is at stake.  There’s a point at which I don’t even have to agree with a stated agenda — as indeed I don’t, in this case — but I respect organization and strategy and forethought.  Which is why I would go home, given even an initial level of hypothetical involvement in any of this.  So I do appreciate the people organizing to protect their own neighborhoods.  There’s a clear, attainable goal: to cause a group of bullies to leave.  There’s a scope of operations: this neighborhood.  There’s a clear justification: to protect life and property.  There’s a philosophy of engagement: by any means necessary, but peacefully first, then violently.  That’s important.

Everybody’s bemoaning that Americans aren’t sophisticated enough in terms of liberal utopia ideas or conservative utopia ideas but based on what I’m seeing, the worst offense of all are these shitty, disorganized tactics on the Antifa side.  (The neighborhood defenders side is also somewhat disorganized, but it’s understandable because they all just got rousted out of their armchairs to do some shit you’d expect your tax dollars to have already handled, and even then they still organize pretty darn well.)  I suppose I’m glad?  It’s not like I want them to be better at it — I’m just surprised *they* don’t want them to be better at it.  How do you respect yourself at all, just blithering around and being a menace?  You know you don’t stand for anything.  If you did, you’d read the Art of War and get it fucking done.  I mean, they’ve got Joe Biden on their side.  What else could you need.  If this is supposed to be a scary coup, it looks more like a 2 year old wandering around and putting things in its mouth, but large scale.

Whatever.  The main battle here at the fire camp, besides getting two out of two of the basic water-in, water-out services that we need in order to function,  and that shower units should not be ordered without management teams having established concurrently, is bugs.  Flies and wasps, the Antifas of the animal kingdom.  I just have a squirt bottle of water close by all the time.  Nick was holding it the other day because I was about to rep out some bench press.  It was maddening; it’s like they knew not to land on us until we were holding a weighted bar directly overhead, and then it was tickle, tickle, tickle.  Nick got pretty hot, and it almost stopped being about the workout.  Little, dirty, beleaguered teddy bear Buffy got jolted out of her sleep by something buzzing around her, and started adorably snapping and bucking around.  “You *get* it, Buffy,” Nick urged.  “We need all hands on deGODAMMIT” and next thing I knew he was violently spraying and swatting his own face and head.  I’m spraying a wasp out of the trailer every other sentence, with this blog.

A thing I’m feeling really ecstatic about today: my dad is seeming somewhat sanguine with the idea of just relocating to Hawaii with Abe, Nick, and myself.  I thought that would be a pretty tough sell, based on his aversion to ocean, sharks, active volcanoes, and travel/relocation generally, plus his utter lack of interest in tropical locales per se and the reasons other people like them, but I think we’re all feeling an impulse to sort of circle the family wagons, throw in together, and all the normal reasons of normal adulthood where you migrate out from your nuclear family and then never really come back together simply don’t apply.  I know a lot of people would rather die than, as adults, live with their nuclear family members, but I feel the opposite.  My mom passed in 2011 and that’s weird, you know, to lose 25% of your family unit.  But the other three of us just appreciate each other more and more, every year I think, and it’s super fun to be in each others’ presence.  Nick really likes my family — “they’re just so easy,” he said, last night.  They are.  We are.  We just like to do creative stuff and dabble in cryptos and eat good food, so Nick is a perfect fit except it’s been his job to get us all lifting, as we trend towards sedentary when left to our own devices.  My dad loves the little bugaboo grandchildren, and Abe hasn’t met Milo yet and probably thinks he has some idea of how unique he is but it’s impossible to explain without sharing space.  And while we’re certainly not worriers, by nature, I really don’t like the thought of living off the continent and leaving my elderly dad to face whatever next bullshit is on tap for 2020 and beyond.  I didn’t even like being four hours away from him, these last two years, and — yeah, I just really want us together if possible.  So, thanks to my brother’s complete fucking disenfranchisement with Seattle, the CHAZ, the ever-present threat of Woke mob rule, and the frankly astonishing leadership vacuum there, he’s in a position to really establish a new anchor point for all of us, and I think we all have something to contribute to a new lifestyle project.  Man, what a dream come true that would be.  So, I feel giddy at the whole idea and really excited to see what pans out.

Time to walk down the hill and get breakfast!  The sun has come out and it’s going to be nice for about 25 more minutes, and then totally inhumane as the shade recedes and the Antifa drones intensify.  The more time we spend working outdoors in the Southwest, the more Nick and I fantasize about getting back to Hawaii, where we spent half of March.  Every morning, every hour of every day, there, we were like: how can it be this nice.  This is insane.  It’s so nice it feels like cheating, like getting away with something.  Come on, summer, and come on, money. 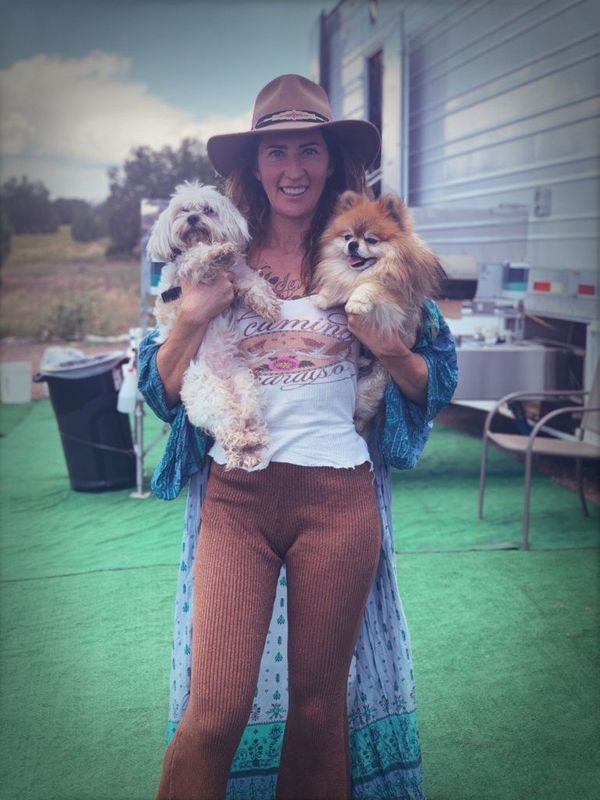 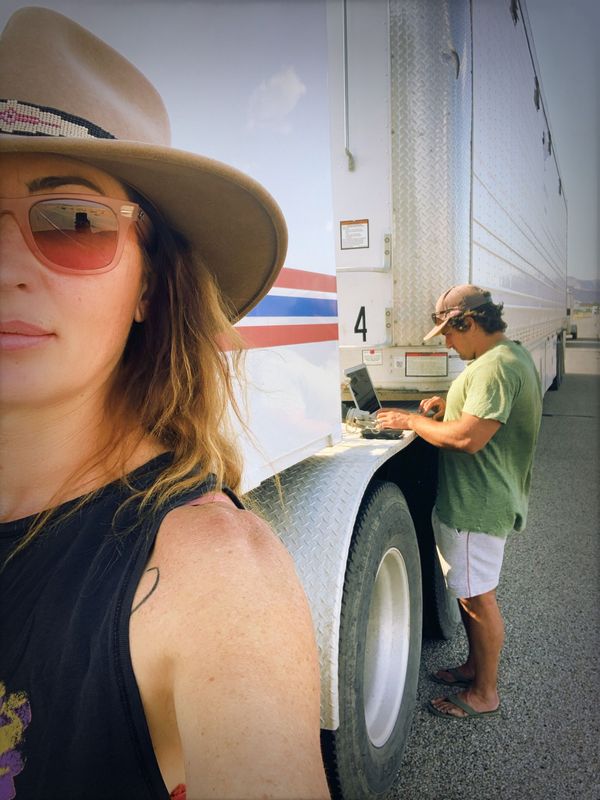 First, of course, the gray water update: two days ago, the driver never came to suck out our 1000 gallon bag, which was odd because we’d come to what